Call him the anti-Ambien. Start one of his books at bedtime and you can forget about slumber. 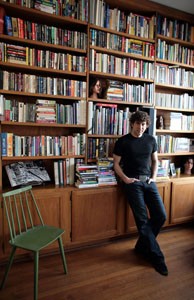 Where do you get your ideas?
This is one of those questions authors are asked a lot, and most of us have cute stock answers (“Target, the ideas aisle.”) The reason is simple: we don’t know.

Ideas can be prompted by a news story or a joke or staring at the ceiling. They come at their own pace and rarely arrive fully formed. The hard part of storytelling is rubbing bits together until a spark flies. I wish I could be more specific. Believe me, how I wish.

Do you outline your novels?
I usually have a pretty good idea of where I’m going and the general route I’ll take to get there. But my process has evolved and changed with each book. They really are all different.

If you’re interested in structure, I’d recommend THE WRITER’S JOURNEY by Christopher Vogler, and SAVE THE CAT by Blake Snyder. The first is about mythic structure; the second is no bullshit, hard-bitten advice. They’re both great.

What’s this about a TV show?
I’m the host and writer of a television show called HIDDEN CITY, which airs on Travel Channel. In it I explore different places by looking at their stories — specifically stories of betrayal and greed and lust and murder. You know, the good stuff.

I also drink a healthy amount of beer, say obnoxious things, train with SWAT, get attacked by a dog, land an airplane, go hunting for treasure, and sit down with some of the most fascinating people imaginable.

How do I become a novelist?

You write. Sorry to be glib, but that’s how you do it. Also, read a lot. I mean a lot. You can’t write without a long-term love of reading. It’s like any trade; before you start your own work, you apprentice.

I have more concrete tips here, if you’re interested.

How do I become a TV host?
I have no idea. I’m honestly rather baffled to find myself one.

How do I find an agent?
I’ve got a detailed article on the subject here. I wrote it shortly after I had gone through the process, and it’s as hands-dirty as I can make it.

Are your characters based on real people?

Not specifically. I steal little bits from life all the time — a mannerism, a line of dialogue, a haircut. But I’ve never tried to replicate someone.

What’s up with the films?
GOOD PEOPLE was made into a movie starring James Franco and Kate Hudson, released in 2014. Most of my other novels have been optioned for film, and are at various stages in the process.

BRILLIANCE was optioned by Legendary Pictures, the company behind the Dark Knight series, Inception, Watchmen, and about two dozen other excellent films. It’s being produced by Joe Roth (Oz the Great and Powerful) and adapted by David Koepp (Spider-Man). Yes, I enjoyed dropping all those names.

THE AMATEURS was recently optioned, and I’ll be adapting the screenplay myself, which I’m geeked about.

Do you research your novels?
That’s half the joy. I’ve shadowed homicide detectives, ridden with gang cops, toured the morgue, interviewed psychiatrists, gone shooting with Special Forces guys, practiced picking deadbolts, been pepper sprayed, learned to make nerve gas, and a bunch of other fun stuff. I particularly love the parts that involve me wearing a bulletproof vest; my wife, not so much.

One thing that surprised me at first is that people are generally very willing to help. Everyone wants their area of expertise portrayed accurately, so it’s usually just as simple as asking.

What do you like about being a writer?
Most everything. I love telling stories for a living. The process of writing has its frustrations, but also its joys (there’s no high like typing “The End.”) The research is incredible. I love meeting other authors. I love working on something that’s purely mine.

But the best part is the idea that I kept somebody up past their bedtime, or made them miss their train stop. As a lifelong addict of story, it makes me happy to think that my work might hit other people the way books hit me.

What do you dislike?
The bad days. Weeks, really. There seems to be a time in every novel when things fall apart. You’re out of sight of land, dubious of your ability to steer it home, and mistrusting your reasons for leaving in the first place. It sucks.

But thus far I’ve found that if I just manage to keep going, I can find my way through. Fingers crossed that keeps working.

What do you like to read?
The bulk of my reading is on the literary side, with a heavy dose of crime fiction and a sprinkling of sci-fi and fantasy. But I’ll read anything good.

What do you use to write?
Microsoft Word, on a PC. I split the time between writing at my desk and taking my laptop to coffeeshops, bars, and cigar shops. It seems to jar things.

I wrote / Facebooked / Twittered and you didn’t respond.
I’m sorry. I make a genuine effort to respond to as many people as I can, but between filming a TV show, writing novels, and, you know, having a life, sometimes I fall behind. Bad Marcus! Bad!