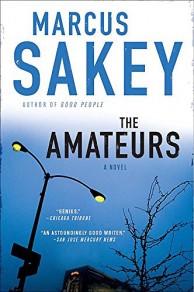 DO YOU GET WHAT YOU DESERVE—
OR WHAT YOU TAKE?

Alex is failing as a father. Ian keeps dangerous secrets. Jenn is pining for adventure; Mitch is pining for Jenn. Four friends just scraping by, finding comfort in each other and the hope that things will get better. But as their twenties fade in the rearview mirror, none of them are turning out to be who—or where—they hoped.

In a time when CEOs steal millions while their employees watch savings dwindle, these four are tired of the honest approach. They’ve decided to stop waiting and start taking.

But a supposedly victimless crime has become a bloody nightmare. People have been killed. Ruthless men pursue them. Tensions they thought long-extinguished are flaring. As their world unravels, each will have to choose between their life and the lives of others.

And for four people pushed to the ragged edge, the only thing more dangerous than the men chasing them might be their best friends.

The Amateurs by Marcus Sakey

The Amateurs by Marcus Sakey – review

Marcus Sakey Is No Amateur at Writing Engrossing Novels